The table saw may be small in comparison with other pieces of heavy equipment at a construction site, but it’s among the most useful. When it’s used well, it can cut and rip through wood, a common material in building most things from furniture to buildings. But with dozens of choices available, choosing the best table saw can be tricky, especially for beginners who have yet to own one.

We consider the WEN 3720 table saw as among the best of its kind for both beginners and veterans in woodworking, from cabinet installation to remodeling the entire houses. Here’s what you need to know about it, nonetheless, before buying it.

The WEN 3720 has several practical features and a few aspects that require improvement. Don’t forget to have a look on Craftsman evolv 15 amp 10 review too. 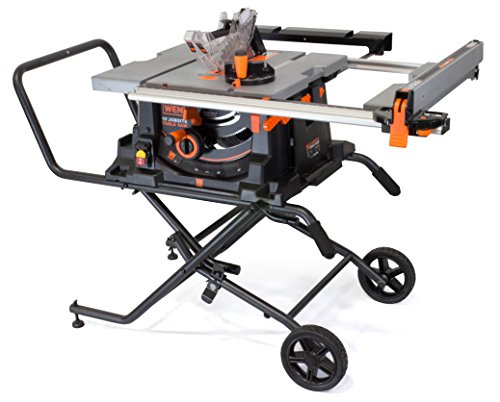 Soft-grip handles and wheeled base

Most table saws are used at jobsites where they may be moved several times from one jobsite to the next or from one area to another within the same jobsite. Portability is thus a desired feature and the WEN 3720 has several things going for it in this regard.

You can fold the table saw, thanks to its collapsible stand, whenever you need to transport it over longer distances, such as when it has to be placed at the back of your pickup truck. You can carry or push it using the ergonomic soft-grip handles for faster transport.

You may also leave the table saw open yet transport it to another place. Just push the table and the 8-inch wheels will do most of the job. The wheels are strong enough to carry the table saw’s weight, both at a standstill and moving, as well as roll over most types of terrain without going flat.

The table saw weighs 85 pounds so it’s heavier than, say, the DeWalt saws. But its heavier weight works to its advantage – it can handle more heavy-duty use, for one thing, while it can still be transported easily with the abovementioned features.

Without extensions, the worktable measures 30 x 45 inches, which is sufficient for most DIY jobs. But when its extensions are flipped open, it will obviously provide a larger working space. No wonder the WEN 3720 is also a common sight at construction jobsites where larger materials are used.

The table also has onboard storage for the accessories that come with the package. There’s space for the miter gauge, rip stick, and adjustment wrenches, among others, so it’s easier to store and find them. Many DIY enthusiasts lose their tools partly because of the absence of built-in storage spaces in heavy equipment but the WEN 3720 takes care of the issue.

There’s also a 2.5-inch dust port that can be connected to a portable vacuum cleaner. You may want to do so because it can be a bummer to clean up the dust after working with wood, not to mention that a cleaner environment makes for a safe work environment.

10-inch blade and its safety features

The result: The saw can cut wood materials from lumber to sheet boards up to nearly 4 inches in depth, as well as a 26-inch ripping capacity. With its sharp blade, it can also make easy work of both hardwoods and softwoods, whether dry or wet.

The blade can also be adjusted in terms of height and blade depending on your current task. You can quickly do so with the adjustment tracking knob on the saw’s front end. You may adjust the angle from 0 to 45 degrees, the standard in the best job saws.

The 26-inch ripping capacity, by the way, allows for cutting boards up to 2.5 inches at 45 degrees and 3-9/16 at 80 degrees. These are also within the standard limits of table saws from the likes of DeWalt and Ridgid.

The accuracy of the cuts will not be compromised as much as you feared it would be with a table saw, thanks to the reliable fence. This clings firmly to the table as it is placed exactly parallel to the blade’s rotation.

The unit is also dado head-compatible. You can swap out the original blade so that it can be replaced with another blade including dado heads so that strong joints can be created.

Who is it best for?

The WEN 3720 is suitable for use by DIY enthusiasts for their home improvement projects, but it’s also popular among professional woodworkers from cabinet installers to carpenters.

If you’re looking for a reasonably priced yet heavy-duty table saw for your jobsite, then be sure to consider the WEN 3720 table saw! We recommend it because its powerful 15-amp motor combines with its heavy-duty blade to deliver exceptional cutting and ripping results every time.

Chop Saw vs Miter Saw – Which One Should You Use?